After a memorable drought that impacted the region in 2015, this water year has been a dramatic turnaround. Climatologically, the wet season is coming to an end across the western portions of the NW and westward flanks of mountain ranges, with less than 25% of annual precipitation falling from May-Sep. And this year, we are very much missing the sun and would roll out the carpet for the dry season, except that it’d probably get soggy.

Since October 1st, the NW has lived up to stereotypical images that most of the country conjures up when thinking about NW climate (i.e., it’s always rainy in Seattle). Nearly the entire tri-state region and western Montana has seen Oct-Apr precipitation in the top 10% of historical records, with a good portion of SE Idaho, eastern Columbia Plateau, and spots across the region having their wettest start to a water year since 1895.

April continued with a barrage of systems bringing rain to the region with the month being wetter and slightly cooler than normal, images from the NW Climate Toolbox, a CIRC product: http://climatetoolbox.org].

We had a very weak La Nina this year. La Nina winters historically usher in wet/cold winters in the NW. However, unlike typical La Nina years, that bring wet conditions to the NW and dry to the SW, this year, nearly the entire western US has been well above average. One remarkable feature this winter has been the onslaught of atmospheric rivers from the central coast of California to Washington State. 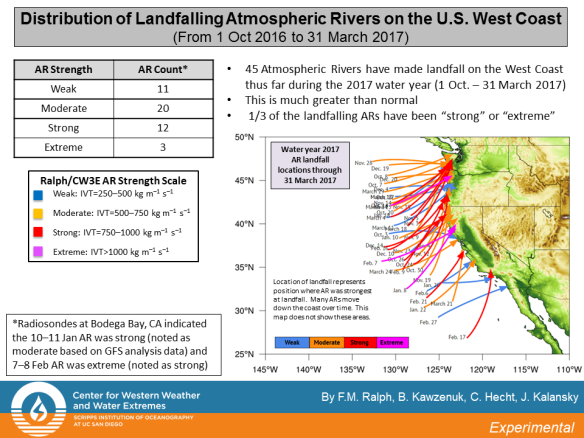 In addition to the overall high amount of total precipitation and frequency of big rainmakers, the persistence of gloom across the NW has been historic, and not in a good way if you like the sun.

Another remarkable feature has been the persistence of cool, wet conditions without much interruption. Over the past two months there have been very few warm/cold days (more than 1 standard deviation from average) and the day-to-day change in temperature has been sufficiently muted.

This has made for a very gloomy last 60 days. Below is a map showing the “sunshine” departure from normal from Climate Engine from March 3-May 1, 2017. The blue hues covering much of Washington, Oregon, and northern Idaho reflect the mood of many residents in co-located regions. April showers bring May flowers though, right?